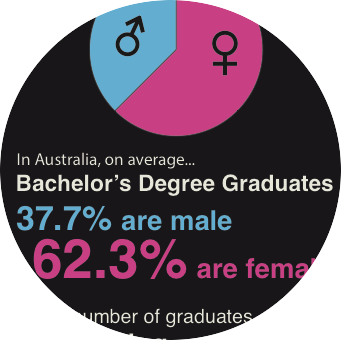 For Grand Challenges in Computer Science (COMP SCI 1104), I worked on a project supervised by Dr Nickolas Falkner where I analysed 10 years of university graduate data to determine whether field dominance by a given gender had any influence on the resulting starting annual salary rates of graduates.

The data for this project was obtained from Grad Stats, an annual report produced by Graduate Careers Australia. This data was processed using both R and Microsoft Excel, in order to ascertain field dominance and corresponding starting salaries for each field, by gender.

The output from this analysis produced some interesting results, which I chose to visualise in the form of an infographic, using Adobe Illustrator. This infographic can be viewed using the below link.

Did you know? Field dominance vs starting salaries